Calling all free spirits, academics, and classically trained modernist types for an evening of amazement 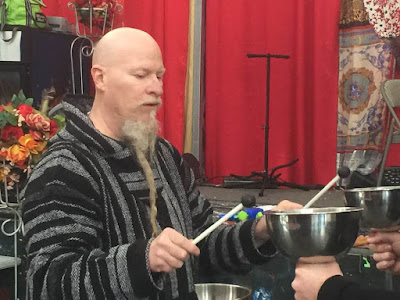 Klimchak is a full-time composer-performer visiting from Atlanta. I had the pleasure of speaking with him at SHAMc this week during one of his practice sessions.

“I’ve been playing music for a long time,” Klimchak explained. He’s SHAMc’s current artist in residence who will be performing this Saturday evening and presenting a Bolder Talk on Sunday afternoon.

“I come from a family of drummers—my dad was a drummer; my grandfather was a drummer. Both got married and stopped to have a family, then it became a hobby. For a long time, I thought that would be my path too."

Klimchak, who goes by his last name, is originally from Louisville, Kentucky and relocated to Atlanta for grad school. That’s about when he decided music would be his life's work.

He composes for modern dance, film, and writes music for theatre as well as his solo performances. “I went pro about 1992
and have been making a living at it ever since,” he said. “I do all original music.” 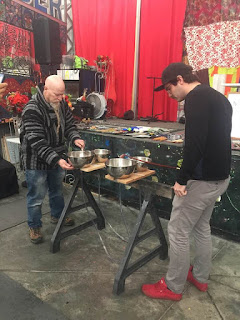 I watched him practice with Saturday’s guest percussionist Sean Hamilton and it almost felt like meditation. The music is like nothing you’ve likely heard before.

“I don’t have a really good name for it to be honest … it’s Klimchak music,” he said. His smile is generous and he’s willing to  explain his process.

"Experimental music is probably a 20th century phenomenon,” he said. “Music got to the point where people needed different things. Electronics gave people a whole new palette to work with.

“I use a lot of homebuilt instruments. I build elaborate structures and do live improv—it is this written thing that has space to play.”

I asked Klimchak to give me an idea who the people are who are most attracted to his music. “In most cases they’re interested in something different. There’s a wide range, lots of different streams of people who like experimental music—a variety of people with different interests,” he said. “They’re sort of free spirits, classically trained modernist people, there is a whole group of academics, and I compose for them as well as the free spirits.”

His Bolder Talk will be at 2:00 p.m. Sunday, at SHAMc. Free admission.

Laura Kepner /www.safetyharborwritersandpoets.com
Posted by Words Are Art at 1:38 PM